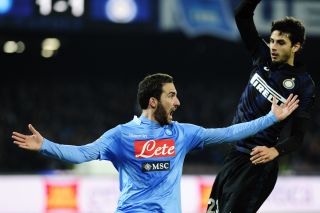 The 26-year-old Argentine has scored nine goals in 16 Serie A games this season since transferring from Spanish giants Real Madrid in the pre-season.

Mourinho's side have seen the majority of their league goals scored by midfielders with strikers Fernando Torres (three goals), Samuel Eto'o (three) and Demba Ba (one) all struggling to find the back of the net.

The sales of Ba and young Belgian midfielder Kevin De Bruyne, linked with a £25m move to German club Wolfsburg, could help finance the purchase of Higuain - a regular starter during Mourinho's tenure at Real Madrid.

Ba joined Chelsea in last season's January transfer window but after only three goals in 23 league appearances, it appears the 28-year-old Senegalese striker is not in Mourinho's plans.

However, Napoli insisted their star goalscorer is not for sale as they as they attempt to stay in touch with Serie A leaders Juventus and be a contender for the UEFA Europa League.