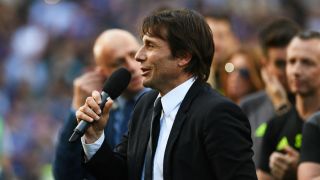 Chelsea manager Antonio Conte says Arsenal are favourites for next weekend's FA Cup final following their failure to qualify for the Champions League.

Victories for Liverpool and Manchester City on Sunday meant Arsenal ended the Premier League season in fifth, missing out on Europe's elite club competition for the first time since the 1997-98 season.

Conte, meanwhile, guided Chelsea to the title in his first season in charge and has an opportunity to clinch the double against Arsene Wenger's men at Wembley on Saturday.

But the Italian has warned Arsenal will be motivated to salvage something from their season.

"If you ask me who you think the favourites are now, I think it's Arsenal," he told a news conference. "They only have this possibility to find a good season after a win in the FA Cup.

"For this reason we must find motivation and find in ourselves the right anger. The game will be very difficult, above all for this reason.

"Arsenal have missed out on the Champions League for the first time in I don't know how many years, so we must prepare in the right way. I'm not talking tactically. I'm talking about motivation, the right fire in our soul and our hearts.

"If we have this in the same proportion as Arsenal in that respect, we have the possibility to do the double and win. Otherwise we risk a lot."

Chelsea collected their trophy following a 5-1 hammering of Sunderland at Stamford Bridge on Sunday and Conte says his players must re-focus quickly following the celebrations.

"This is the real danger for us," he added. "To think that this season is finished and if you win or lose it doesn't change the situation. We must think as winners, not as losers.

"It's important to celebrate as we did today, enjoying this moment with our families and fans, and celebrate this title because it wasn't easy, this season.

"But as of tomorrow, I'll try and push a lot to explain that this season will be great. If we hadn't won the title, this season would have been good. Having won it, it's become great.

"Now I think this season can become fantastic if we are able to win the FA Cup. We must find the right motivation.

"At this level, with Chelsea and Arsenal at the same level... we lost 3-0 in the league, won the other one 3-1, so we have an opportunity to play the third game with Arsenal.

"It's important for us to celebrate but then to find the right fire in our soul to work very hard this week and 'feel' this game.

"It's a great opportunity to win and do the double."