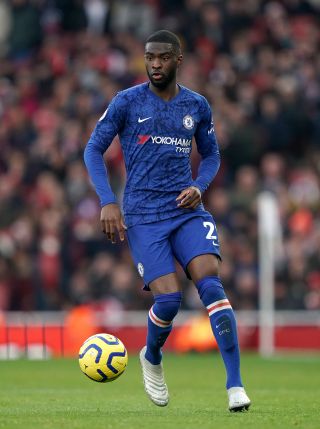 Frank Lampard has insisted he retains full faith in Fikayo Tomori after the Chelsea defender’s first appearance since February in the 2-0 loss to Liverpool.

The England defender has been heavily linked with a loan move away from Chelsea this term, especially in light of Brazil stalwart Thiago Silva’s free transfer arrival from Paris St Germain.

But Lampard selected Tomori ahead of Toni Rudiger for Chelsea’s bench on Sunday, and insisted that indicates his enduring trust in the 22-year-old.

“I think Tomori did really well, he hasn’t played for a while and it shows his fitness with the rest of the squad, and I was delighted with him,” said Lampard.

“I hope he feels the trust in him. He showed that last year, starting last season’s pre-season as fifth centre-back in most people’s eyes and then playing 20-plus games for Chelsea, so I have got full confidence in him.”

Tomori started last season in fine form as he forced his major Chelsea breakthrough, but did not feature at all in the Blues’ first team after lockdown at the Premier League’s tail-end.

Brazil defender Silva’s arrival has increased speculation on a loan switch for Tomori, but Lampard’s selection decision on Sunday indicates moves to keep him on hand at Stamford Bridge this term.

Germany defender Rudiger found himself out of the squad entirely against Liverpool, having started in the 3-1 win at Brighton on Monday, but Lampard insisted his players will have to adjust to Chelsea’s bolstered squad.

“At the moment I have five centre-backs at the club; I can’t pick a squad which has three of them on the bench,” said Lampard.

“That is the way it is. I have to pick a squad on the way they train, situations, and that is just how it is. That is a selection one today.”

Christensen’s red card for a rugby tackle on Mane and subsequent suspension will force another defensive reshuffle in any case.

The Blues will host Barnsley in Carabao Cup action on Wednesday, where Lampard is likely to make wholesale changes and has already confirmed Willy Caballero will step in for the struggling Kepa Arrizabalaga in goal.

Wednesday’s encounter could still come too soon for new recruits Hakim Ziyech, Ben Chilwell and Silva, while Christian Pulisic continues to nurse the after-effects of a hamstring issue.

Striker Timo Werner is one new addition already in impressive form, having won two penalties in as many matches.

“I am very pleased with Timo’s start; we brought him to the club due to the assets we are already seeing,” said Lampard.

“We will see goals from him, we know that. I thought with the second half and how difficult it would have been for him and Mason, he comes up with a moment which could have got us back into the game.”

Champions Liverpool have started their title defence with two wins, but boss Jurgen Klopp was delighted with a clean sheet after leaking three goals against Leeds.

“I saw us, I saw us playing our football, and I loved it,” said Klopp.

“Sadio chasing for the second goal, it says everything about us and the team as well.

“I loved it, because we had these situations quite a lot where we chased the goalie, and Sadio’s been really close to doing that before, so I loved that he got reward for that situation.”