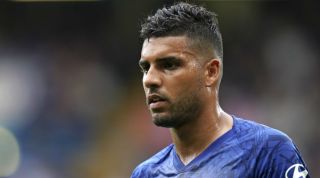 Emerson Palmieri's promise under Frank Lampard could see him rewarded with a new deal, according to Gazzetta dello Sport (via the Daily Mail).

The left-back started his season with a bang by hitting the woodwork against Manchester United, and has since started all four of Chelsea's Premier League games so far this season.

The Italian report states that Emerson will recieve a raise of £1 million per year, taking hs annual wage from £3.5m to £4.5m.

The Brazil-born Italy international joined the Blues from Roma in January 2018 for £18m, and became the Blues' preferred option at left-back for the final two months of the campaign.

Emerson's current contract runs until 2022, but Chelsea are keen to tie him down for longer - especially given their transfer restrictions.

The 25-year-old featured for Italy in their 3-1 win over Armenia on Thursday night.

WSL returns for 2019/20: every question you have, answered by an expert