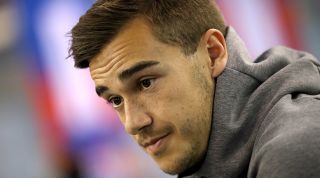 The new season may still be in its infancy, but the first international break of the season is already upon us and Gareth Southgate’s squad contains a number of new faces who could be in line for their first ever international caps.

The Three Lions chief hasn’t been afraid of blooding young players in the past, throwing Callum Hudson-Odoi and Jadon Sancho straight into the team when he felt they were ready.

With that in mind, here’s how we think England should line up against Bulgaria next Saturday...

Fresh from his penalty heroics against Switzerland last time out, Pickford looks set to continue his dominance of the No.1 shirt. The Everton stopper was once embroiled in battle with Nick Pope and Jack Butland, but those days are long gone.

Pope and his former Burnley team-mate Tom Heaton join Pickford in the most recent national team squad, but neither are likely to challenge the Wearsider’s undisputed position as England’s first-choice goalkeeper.

England are arguably blessed with the best pool of right-backs in world football, with Kieran Trippier, Aaron Wan-Bissaka and Kyle Walker all superb options. The outstanding member of this current crop, however, is also its youngest.

Liverpool’s 20-year-old Alexander-Arnold has already played in two Champions League finals and came away with a winner’s medal last time out; just reward for a terrific season in which he consistently showed off his remarkable playmaking abilities. Set-piece nous is an added bonus.

With Joe Gomez yet to make a Premier League start for Liverpool this season, Keane should grab this opportunity while he can. The towering Everton defender has seven caps to his name and scored for the Three Lions in their most recent Euro qualifier against Montenegro, heading in a Ross Barkley cross.

Now the world’s most expensive defender, Maguire has an extra level of expectation on his shoulders. That said, Slabhead has often saved his best performances for an England shirt, impressing with authoritative displays in the 2018 World Cup and inaugural Nations League.

England have only conceded one goal in Euro qualifying so far, and the Manchester United man will have a huge role in trying to keep it that way.

With Ben Chilwell only just making his return from a hip injury, Spurs’ Rose should start at left-back against Bulgaria. It was a strange summer for the 29-year-old, who seemed set to leave north London after being left out of the club’s pre-season tour of Asia.

No move ever materialised, though, and now Rose has started each of the Lilywhites’ opening three Premier League fixtures. He should also get the nod against Bulgaria, unless Chilwell can convince Gareth Southgate that he is fully fit.

Sitting at the base of England’s midfield three will most likely be Rice. Since shifting his international allegiances away from the Republic of Ireland, the 20-year-old has been included in each of Gareth Southgate’s Three Lions squads and looks most likely to provide his team with an added layer of steel in midfield.

The West Ham man has continued his fine form from last season into the current campaign, setting the tempo of the Hammers’ attacks in their 3-1 win over Watford last weekend.

Understated but quietly excellent, Winks looks well placed to begin making an England place his own. The 23-year-old has only won three caps since 2017, but is now a firm first choice in Mauricio Pochettino’s Tottenham side after a string of impressive performances against high-level opposition.

It’s probably between him and Jordan Henderson for a spot in the team, but Southgate may be inclined to rest the Liverpool man for what should be a relatively straightforward fixture.

Some might say it’s too early for Maddison, given that he’s not actually won his first senior cap for the national side yet. Others would say it’s criminally overdue, though, given his fine debut season for Leicester and excellent start to 2019/20.

The 22-year-old created more chances than anyone else in the Premier League last season and added seven goals – making him significantly more productive than any of his positional rivals. He has also proved his positional flexibility under Brendan Rodgers, surely alleviating a previous concern of Southgate’s.

He just keeps going. Two goals and three assists from three Bundesliga games has made for a fine start to 2019/20 for Sancho, who also starred in Borussia Dortmund’s DFL-Supercup win over Bayern Munich with another goal and an assist.

The 19-year-old’s stock has soared since he left Manchester City for Signal Iduna Park in 2017, and his consistent excellence in Germany makes him a shoo-in starter for Southgate right now.

Sterling’s opening displays of the season for Manchester City suggest that another hugely productive campaign lies ahead – the 24-year-old has already scored five goals in four games.

He finally broke his England scoring hoodoo against Spain in October last year, ending a difficult run of 27 games and 1,825 minutes without a goal; since then he’s netted a hat-trick against the Czech Republic and another in Montenegro.

England’s captain and talisman, and rightly so. Not just a supreme goalscorer but also a talented creative force whose intelligent movement and passing often facilitates his team-mates.

The last time Kane was let loose on the same pitch as Sancho and Sterling, England scored five goals. It’s not been the easiest of starts to the season for Spurs, but the 26-year-old has still managed three goals. We’d take it.

OPINION In defence of Michael Owen: the ex-footballer who just wants to be honest

FEATURE The bizarre history of football-inspired names: from German Kevins to the 600 Brazilians called Lineker