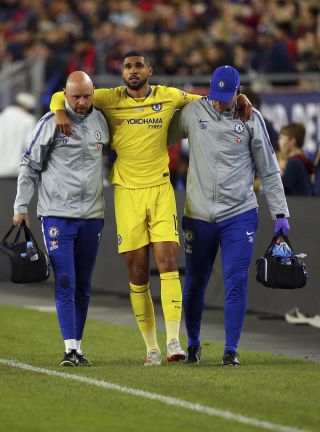 Chelsea midfielder Ruben Loftus-Cheek has ruptured his Achilles tendon and will have surgery on Thursday night.

The club announced that the England international suffered the injury during the 3-0 friendly win over New England Revolution in Boston on Wednesday.

The 23-year-old will now miss the Europa League final with Arsenal, as well as England’s summer Nations League commitments.

With the Premier League season over and the Europa League final not until the end of the month, Chelsea were in America for a friendly to promote the club’s Say No To Antisemitism campaign.

Prior to the fixture, manager Maurizio Sarri lauded the trip’s purpose, but conceded that he felt his men needed to rest.

Nevertheless, the Italian fielded a strong starting XI at the Gillette Stadium in Foxborough, Massachusetts, where owner Roman Abramovich was in attendance on Wednesday night.

“We go there for a good reason I think, so as a man I am very happy to go there,” Sarri had said.

“As a coach, of course, I am a little bit worried because I know very well that the team now needs rest. So it is not the best way to prepare for the final, I think.”

Speaking about Loftus-Cheek, who had a growing influence on Chelsea towards the end of the season, England boss Gareth Southgate said on Thursday: “I went to bed last night and Ruben’s in the squad and playing brilliantly.

“He misses now a major European final and a brilliant opportunity for us.”