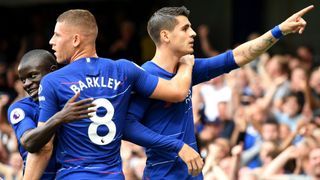 Chelsea should be fighting for the Premier League title under Maurizio Sarri this season, according to Ashley Cole.

The 2016-17 champions have started the campaign in strong fashion, following up a 3-0 win away at Huddersfield Town with a 3-2 victory at home to Arsenal.

Cole, who was part of Chelsea's title-winning side of 2009-10, thinks his old club should be aiming to topple Manchester City this term, even if many do not feel they are clear candidates.

"Chelsea have gone about their business a little bit quiet in terms of having a new manager," the LA Galaxy full-back said to ESPN FC.

"They should be fighting for the title, but I don't think people are [thinking that way] at the minute. To get six points from two games, it's a fantastic start. They've just got to keep going."

3 - Chelsea’s 3-0 win was the largest margin of victory in their first Premier League game under a new manager since 2008, when Luiz Felipe Scolari oversaw a 4-0 win against Portsmouth. Introduction. 11 August 2018

Cole was a double Premier League champion with Arsenal, who have started the campaign with back-to-back defeats to City and Chelsea.

The results have led to some early criticism of new head coach Unai Emery, but Cole is confident things will quickly improve.

"With Arsenal, there's a new manager still, but I think the first two games they had were very, very difficult, so I think they'll start picking up points now," he said.

Cole added that it is strange not to see former manager Arsene Wenger in charge, although he believes the end of last season was the right time for the 68-year-old to leave.

"I used to watch the games with [Wenger] in the long jacket and you don't see that no more," he said. "But times change, people move on, and I think it was his time to go. And obviously they've brought in a new manager with new ideas and a new philosophy.

"I think it might take a little bit of time, he has to gel the players together, he's got a few new players. To put his philosophy across and how he wants to play, I don't think it's going to happen straight away."

To the man who believed in me and trusted me to play in a great team,thank you for having my back. I will never forget the conversations we had and the belief you had in me thank you for some great memories and good luck in whatever is next for You April 20, 2018