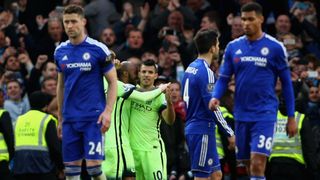 Guus Hiddink admits some of his Chelsea stars have begun to take it easy as their attention turns to the upcoming European Championship.

It was their 16th reverse in all competitions during what has been an abysmal campaign, with Chelsea languishing in 10th and still six points shy of their worst Premier League points tally of 50.

Hiddink believes with the season coming to the end and no realistic target to aim for, some of the Chelsea players have begun preserving themselves for the Euros in France.

"Partly true, but I cannot blame the players for having a lack of attitude," the Dutchman said on the matter.

"Some players might think that, but I cannot look into their minds, in their brains. They might be thinking of the Euros.

"When there is nothing at stake then with some people there is a little bit of a lack of the ultimate work."

Despite being out of it Chelsea still have a big say in the title race for this season with home games against Tottenham and leaders Leicester City to come.