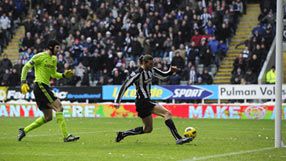 Everything is going Tottenham Hotspur's way, however, as Aaron Lennon scored in stoppage-time to complete a 2-1 comeback win over Liverpool in an action-packed encounter at White Hart Lane.

The day's five goals took the weekend tally to 41 in 10 games - equalling the Premier League record - with all 20 teams scoring.

GEAR:Up to £10 off all Premier League kits with Kitbag. Free delivery on orders over £40

Manchester United, who hammered Blackburn Rovers 7-1 on Saturday helped by five goals from Dimitar Berbatov, top the table on 31 points with Chelsea and Arsenal, 4-2 winners at Aston Villa, both on 29.

Manchester City are fourth on 26 after being held to a 1-1 draw at Stoke City and Spurs fifth on 25.

Having worked all morning to clear the pitch and surrounding areas of snow, Newcastle were rewarded with a gift after six minutes when Alex's ill-judged back-pass rolled past Petr Cech and Andy Carroll nipped in to tuck the ball into an empty net.

Chelsea, who had lost their last two league matches, forced their way back into the game and levelled at the end of the first half when a lovely flick by Florent Malouda sent Salomon Kalou through to score with a deflected shot.

Chelsea had most of the ball in the second half but though Kalou somehow missed from two metres out, they struggled to create any other clear chances.

"We had a bad start but after that it was a good reaction and the performance was good but we have to do better up front," Chelsea manager Carlo Anceolotti told Sky Sports.

"It's not a good moment, we've lost the top of the table. We have to improve, it is not enough now what we are doing."

Their persistence paid off after 42 minutes when defender Martin Skrtel headed a Raul Meireles free-kick into the back of team mate David Ngog and reacted sharply to bang in the loose ball.

Rodriguez and Fernando Torres, twice, both took too long to unleash shots either side of half-time when Liverpool should have made the game safe and Spurs took advantage of their escape.

Meireles headed a Gareth Bale shot off the line but Ngog then inexplicably jumped with his hands above his head when in a wall defending a Bale free-kick to concede a penalty.

Tottenham did level five minutes later, though, when Skrtel turned a low Luka Modric cross into his own goal following a driving run by the Croatia midfielder.

They took all three points when Lennon ran on to a Crouch flick two minutes into stoppage-time and neatly tucked in the winner.