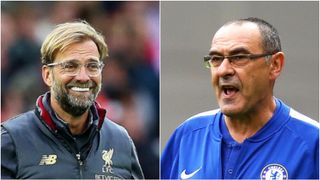 Liverpool and Chelsea have both enjoyed flying starts to the Premier League season, but something will have to give when they meet at Stamford Bridge on Saturday.

The Reds have won all six of their opening top-flight games - the first time they have done so in the Premier League era - and are sitting pretty in top spot going into the weekend.

But Chelsea have been similarly impressive, dropping points for the first time in a frustrating 0-0 draw at London rivals West Ham in their last match.

Manchester City split the two sides in the embryonic table but there are at least signs that 2018-19 will have an exciting title race involving at least a couple of teams, rather than the record-smashing procession Pep Guardiola oversaw last term.

Eden Hazard's stunning solo goal snatched an EFL Cup victory at Anfield in midweek and showed the Reds are not infallible, but will the stronger Premier League title challenge come from Liverpool, or from Chelsea?

The best compliment that can be paid to Jurgen Klopp and Liverpool is that substance, at least on the early evidence, has been added to style.

That Liverpool are among one of the most attractive, free-flowing and at times downright terrifyingly brilliant teams to watch since Klopp took over was never really in question.

What was up for debate, though, was can Liverpool win ugly? When the chips are down and the pressure is on could they ride the wave? For the most part the answer has been no.

Defensive fragility has been a stick with which Klopp's Liverpool were regularly and rightfully beaten as the German attempts to end almost three decades of top-flight pain.

But the capture of Virgil van Dijk from Southampton in January was a key building block in a defensive wall that was further reinforced by the signing of Brazil's world-class goalkeeper Alisson, while strength in midfield has arrived in the form of Naby Keita and Fabinho.

The attacking prowess remains undoubtedly the biggest weapon in Klopp's impressive arsenal. It's hardly a surprise to read that only City have scored more than Liverpool's 14 Premier League goals – a tally matched by Chelsea.

What will be far more pleasing to Klopp, though, is the statistic that says two goals against and four clean sheets in six games.

And perhaps the most satisfying aspect has been the manner of the results - a toughed-out 1-0 win at home to Brighton and Hove Albion, 2-1 successes at Leicester City and Tottenham, and a professional if unspectacular 2-0 triumph at Crystal Palace.

There is a ruthless efficiency about Liverpool's play to go alongside the pleasing-on-the-eye attack.

That should be a concern to every team in the Premier League, including City.

Guardiola's swashbucklers remain the benchmark, but I felt at the start of the season that Liverpool will be the biggest threat to their throne and nothing I've seen from Chelsea or any other side has yet to convince me otherwise.

Maurizio Sarri has said it could take a year for his side to bridge the gap with Liverpool but early signs suggest his Chelsea team are very much ahead of schedule.

It is easy to forget Chelsea have won two of the previous four Premier League titles and the bulk of their last successful squad is still in place, albeit without Diego Costa's goals.

Chelsea have been trapped in a cycle of boom or bust in recent years but Sarri's determined commitment to a style he honed at Napoli indicates they are on an upward curve once more.

Napoli set a club record for Serie A points last season but still fell short of overhauling Juventus and the lack of titles on Sarri's CV has been flagged by his old boss Aurelio De Laurentiis.

The Europa League poses a challenge for Chelsea and it will be fascinating to see whether Sarri continues to name teams as strong as the XI he sent out for their opener at PAOK. An early exit could clear their schedule significantly and boost their title chances.

114 – Since his Premier League debut in August 2012, Eden Hazard has been directly involved in more goals than any other midfielder in the competition (73 goals, 41 assists). Magician. September 15, 2018

Chelsea boast arguably the most talented player in the Premier League in Hazard, with the Belgium star's hat-trick against Cardiff City leading Sarri to suggest he could challenge for the Golden Boot this season.

Getting the best out of Hazard will be key if Chelsea are to maintain their early-season form but the seam of talent running through the Blues squad is deep.

World Cup winner N'Golo Kante is being asked to play a slightly different role following the signing of pass master Jorginho but the former Leicester City midfielder can and will adapt.

Costa's nous and eye for goal in attack will be missed but Sarri is a manager at the top of his game and can ensure it is Chelsea who push City the hardest this season.