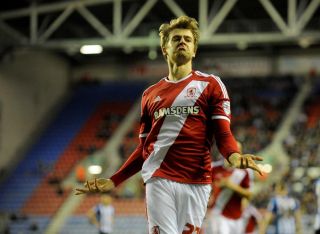 The England Under-21 forward moved to the Championship club in August and has impressed for Aitor Karanka's side with seven goals in 18 league appearances.

Bamford's form has helped Middlesbrough challenge at the top of the table and they sit fourth going into the new year – five points behind leaders Bournemouth.

It is Bamford's second season in the Championship, having spent the second half of last season on loan at Derby County, though they missed out on promotion in the play-off final against QPR.

One player leaving Middlesborugh is goalkeeper Jason Steele, who has turned his loan spell at Blackburn Rovers into a permanent deal.

Steele was sent off in Karanka's first game in charge at Leeds United last November, subsequently featuring just once - in Boro's final match of last season.