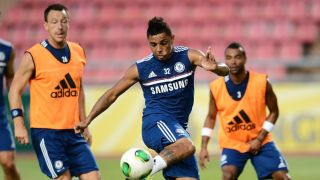 Chelsea full-back Wallace has joined Brazilian Serie A side Gremio on loan until June 2017.

The 21-year-old signed for the reigning Premier League champions from Fluminense in 2013 but is yet to make a first-team appearance at Stamford Bridge.

Following loan spells at Inter - where he made three substitute appearances in 2013-14 - and Eredivisie side Vitesse Arnhem, Wallace joined Italian top-flight newcomers Carpi for the current campaign.

He started one game apiece in Italy's Serie A and the Coppa Italia on his return to Italian football but he will now ply his trade in his homeland of Brazil once more.

Chelsea confirmed the move in a statement on their official website on Thursday.

Wallace is capped at Under-20 and Under-17 level for Brazil.