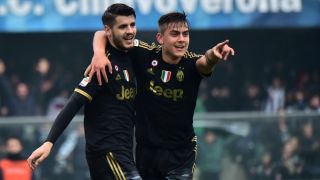 Alvaro Morata scored his second brace in five days as Juventus comfortably dispatched Chievo 4-0 to record a 12th consecutive Serie A victory that turns up the heat on Napoli.

Morata scored twice on Wednesday as Juve earned a 3-0 first-leg advantage against Inter in the Coppa Italia semi-finals and the striker took his tally for the season to seven - the champions equalling their record for consecutive league wins in a single season.

Juve began Sunday two points off leaders Napoli - who play Empoli later in the day - but made an ideal start at the Stadio Marc'Antonio Bentegodi when Morata tapped in Stephan Lichtsteiner's cross from the right five minutes in.

In their first outing since top scorer Alberto Paloschi's departure for Swansea City, mid-table Chievo struggled to ask questions of Massimiliano Allegri's side and fell further behind when Morata doubled his tally on the stroke of half-time.

With Juve well on their way to maximum points, Alex Sandro and Paul Pogba added further gloss to a result that was never in doubt with quickfire goals after the hour, as Allegri's men returned to Turin with their revival in full effect.

Alex Sandro came in for the suspended Patrice Evra at left-back and, after the Brazilian fired over early on, Morata handed Juve a sixth-minute lead with a close-range finish following Lichtsteiner's cross from the right.

As Juve dominated the opening half-hour, Pogba twice went close to doubling the advantage with long-range efforts, while Chievo struggled to offer a threat aside from Nicola Rigoni's effort, which was comfortably saved by Gianluigi Buffon.

Juve's dominance was further rewarded when Morata doubled the lead with a carbon copy of his opener - Sami Khedira collecting Paulo Dybala's pass before squaring for the Spaniard to convert.

Khedira was replaced by Stefano Sturaro at the break, having appeared to suffer a knock midway through the first half, with Juve staying on top after the restart.

Chievo claimed a point at Juventus Stadium in the reverse fixture, while the champions were in the midst of their early-season malaise, and Ivan Radovanovic sent a shot wide as the hosts sought a way back into the game.

However, Alex Sandro added a third to remove any doubt of where the points were heading, Pogba showing composure to pivot on the ball and play in the full-back who calmly slotted past Albano Bizzarri.

With Juve fully in the groove, Pogba deservedly got in on the act with arguably the pick of the goals, turning away from Dario Dainelli before calmly rolling the ball beyond a helpless Bizzarri.

Juve could have extended their lead further when the dangerous Alex Sandro and Pogba each rattled the woodwork in the latter stages, Allegri's men seeing out a convincing win with ease.