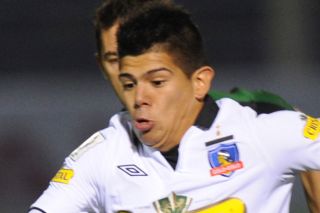 Hours after Universidad Catolica had been thrashed by Universidad Chile, Colo Colo took advantage with a 3-0 victory at home to O'Higgins.

Colo Colo's 10th win in 12 games pushed them into 32 points, seven ahead of Universidad Catolica and well clear of Deportes Iquique (22) and O'Higgins (22).

Hector Tapia's men would have expected to be seriously tested at the Estadio Monumental David Arellano, yet were ahead after two minutes.

A sloppy turnover of possession in midfield led to Felipe Flores putting away Jose Fuenzalida's cross to make it 1-0.

O'Higgins stayed in the contest until the 81st minute as Colo Colo doubled their lead through substitute Claudio Baeza.

Another substitute, Mathias Vidangossy, did all the hard work down the left and squared for Baeza to tap in the easiest of goals.

Fuenzalida saw red with four minutes to play after a dangerous slide tackle.

But his side managed to score once more to finish after Jaime Valdes was brought down by goalkeeper Paulo Garces, and Esteban Paredes put away the penalty.

Patricio Rubio's brace was the key for Universidad Chile in their win over Catolica, with Gustavo Lorenzetti netting the game's other goal.

Cobresal secured a 1-0 win at Union La Calera, Huachipato and Audax Italiano drew 0-0 and Cobresal claimed a 2-1 victory at home to Nublense.

Deportes Iquique beat Everton 2-0 and bottom side Rangers suffered yet another loss, thrashed 4-0 by Union Espanola.