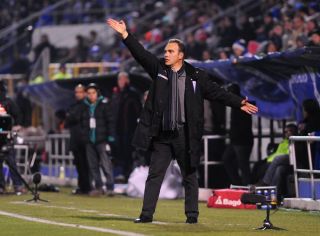 Colo Colo entered the last weekend of the campaign top of the table on goal difference but lost 2-0 at Santiago Wanderers, which saw them slip to third after Martin Lasarte's Universidad Chile defeated Union La Calera 1-0.

Late drama on Saturday decided the title with no goals in either of the critical fixtures until Universidad Chile's Gustavo Canales scored in the 88th minute from the penalty spot.

Union conceded the penalty when Mario Berrios blocked a cross with his hand and Canales made no mistake, picking out the top corner.

With Universidad Chile ahead in the capital, Colo Colo had to win in Valparaiso but instead they conceded twice in stoppage time to lose to the Wanderers.

The two results on Saturday saw Universidad Chile move up to 44 points, one ahead of Santiago Wanderers, who won their last 10 league games to finish second.

Colo Colo (41) dropped to third, still 10 points clear of fourth-placed Palestino, who finished their campaign with a 2-0 win over Barnechea on Sunday.

In the other games on Sunday, Union Espanola won 3-1 at Cobresal, Antofagasta defeated O'Higgins 2-1 and Audax Italiano trumped San Marcos 3-0.

Huachipato crushed Deportes Iquique 5-0 on Saturday to claim fifth with 26 points, while bottom club Cobreloa finished their season with a 4-2 triumph over Nublense and Universidad Catolica drew 2-2 with Universidad Concepcion.