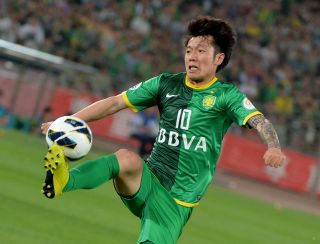 The victory, coupled with Guizhou Renhe's 3-0 defeat at Hangzhou, confirmed third place in the Chinese Super League for Guoan with a game to spare, meaning they have repeated last season's standing.

Peter Utaka netted a pair of first-half penalties, his eighth and ninth goals for the club in just his 10th game, to put Guoan in charge on Wednesday, although they lived a charmed life with Roda Antar crashing a header against the post for Luneng.

Radomir Antic's Shandong are also guaranteed of Champions League football next season, having secured second place, and got back into the contest 20 minutes from time through Vagner Love.

Their top-three spot was confirmed by Renhe's loss in Hangzhou, sealed with the help of Davy Claude Angan's double.

After a goalless first half, the Ivorian struck on the hour to get the ball rolling, and put the gloss on the result two minutes after Wang Song had doubled Hangzhou's advantage.

Three points put paid to any relegation fears Hangzhou may have had, but Changchun Yatai now require a win on the final day of the season to avoid the drop.

Qingdao Jonoon grabbed a vital 1-0 win over Jiangsu Sainty, moving above Yatai - who are two points off safety with just one game to go.

They now require a win over Liaoning Whowin on Sunday, while hoping either Sainty or Jonoon lose against Shanghai SIPG and Guoan respectively.

SIPG may be in confident mood after holding champions Guangzhou Evergrande to a 1-1 draw on Wednesday.

Danny McBreen's 90th-minute equaliser secured a share of the spoils to deny Marcelo Lippi, who made 11 changes to the side that drew their Champions League final first leg 2-2 with FC Seoul in the week.