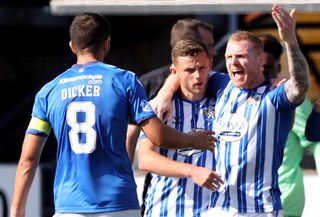 Midfielder Ryan Christie opened the scoring for the champions with a free-kick from distance after 10 minutes but Killie’s veteran winger levelled in the 24th minute from a spot-kick conceded by the unconvincing defender Christopher Jullien.

Neil Lennon’s side stepped up the tempo after the break but all the huffing and puffing came to nothing against a disciplined, well-organised Killie team who defended as if their lives depended on it.

Celtic, with Vasilis Barkas making his debut in goal following his arrival from signing AEK Athens, looked sprightly from kick-off but it was Killie who had the first chance in the sixth minute when striker Nicke Kabamba headed a Ross Millen cross over the bar from 12 yards.

The Hoops, though, scored with their first shot on goal, after Killie skipper Gary Dicker had been booked for a foul on French striker Odsonne Edouard 30 yards from goal.

Christie stepped up and rather casually bent the free-kick past keeper Danny Rogers, making his first start for the home side.

Kilmarnock’s leveller came when Jullien first allowed Rory McKenzie to keep the ball in play down the flank and then tangled clumsily with Kabamba on the byline inside the box.

Referee Alan Muir pointed to the spot and 36-year-old Burke steered the ball low past the diving Barkas for his second goal in two games.

It was a needlessly conceded goal and until the break there was little between the teams.

Kabamba headed another Millen cross over the bar and Edouard went close with a 25-yard free kick.

Five minutes before the break Kabamba got the better of Jullien again in a tussle 35 yards from goal but his shot was deflected by the recovering Hoops centre-back over Barkas, which allowed the keeper to gather.

In the last penalty box action before the interval Celtic winger James Forrest stretched and missed a terrific Christie cross but Lennon would have been looking for so much more from his team.

Defender Brandon Haunstrup, signed from Portsmouth, replaced McKenzie for the second half to make his Killie debut but was soon under pressure along with his new team-mates.

Edouard had a couple of attempts on goal, with Callum McGregor skimming the bar with a shot but Kilmarnock held firm.

In the 65th minute Lennon brought on striker Patryk Klimala and defender Hatem Elhamed for Mohamed Elyounoussi and Jeremie Frimpong in a bid to find another way through.

Still, the Kilmarnock rearguard blocked everything that came their way.

In the latter stages midfielder Olivier Ntcham was introduced for skipper Scott Brown and Boli Bolingoli replaced Taylor but Kilmarnock, with impressive determination, saw out three added minutes for a deserved point.