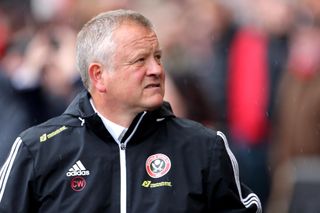 Sheffield United manager Chris Wilder believes creating a feeling of unity at the club is vital if the Blades are to survive in the Premier League.

United have nine points from their opening eight games this season to lie a point above the relegation zone ahead of Monday’s visit of Arsenal.

Asked to name his proudest achievement since replacing Nigel Adkins in 2016, Wilder might have been expected to choose securing promotion from League One at the first attempt or getting the club back into the top flight.

“The biggest thing, the best thing, is getting everyone back on board,” the 52-year-old told the Sheffield Star. “Seeing the fans as they are, at one with the boys if you like, that’s the bit that really stands out for me.

“I think it’s important at every club. When you don’t have it there, it’s very rare you are going to be successful.

“Success of course is relative. But the crowd relate to this team and the players because of how they go about their business. Of course there are opinions. But when this club has been at it’s best, there’s been a togetherness.

“The players also relate to the crowd. I’ve been in changing rooms where players have slagged supporters off and I’ve been out and about when supporters have hammered players.

“I’ve never had that feeling, when players are saying ‘forget that lot out there. We’re in it ourselves’. It’s happened before, when players go insular.

“But I’ve never felt that here. Never. OK, people might have a moan about individual performances or results. But these lads never leave themselves open for it. They leave everything out there.

“The level of support we’ve received has been outstanding. I think that’s because they’ve seen what we’ve achieved and how we’ve gone about it. It’s been incredible at Bramall Lane.

Wilder is waiting on the fitness of John Fleck, David McGoldrick and record signing Oli McBurnie before deciding his starting line-up against Arsenal.