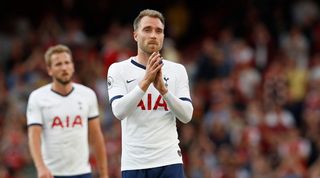 The Denmark international is in the final year of his deal with the Premier League club and is free to agree a deal to leave ahead of the 2020/21 campaign in the New Year.

He said earlier in the summer that he was ready for “a new adventure” but failed to secure a move away from Spurs before transfer deadline day.

The Express reports that Atleti are among the clubs aiming to secure the services of the playmaker in January.

He is understood to have turned down an extension worth £200,000-per-week at Tottenham and favours a move to Atletico Madrid’s domestic rivals Barcelona or Real Madrid.

No offer has been made by either of the El Clasico giants but Inter Milan,Juventus and Manchester United are among the major European clubs to have expressed interest in a free transfer swoop.

Eriksen has featured in every Spurs game of the Premier League season so far and scored against Arsenal in their last fixture, a 2-2 draw at the Emirates.