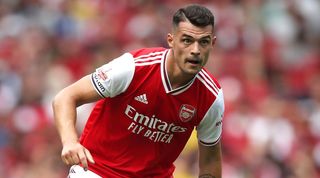 There aren't too many certainties in football, and generally, that's what keeps us glued. However, if there's one thing you can set your watch by it's that, at least a couple of times a season, Granit Xhaka will have a temporary slip into the realm of raving madness.

There's a famously thin line between brilliance and idiocy, and a reputation for the ridiculous has eclipsed Xhaka's career at Arsenal.

On Sunday, the north London derby played host to a tragic masterpiece of ‘Xhakaism’: a second-half performance that the midfielder would have been proud to present at an interview, rendered utterly meaningless in the eyes of fans after giving away a stupid penalty in the first half.

Not just a nudge gone awry, either: an obvious, open-legged lunge at Son Heung-min, followed by a furious finger wag of innocence towards referee Martin Atkinson. Pure, peak Xhaka.

It's an Arsenal groundhog day. The midfielder cancelled out his own exquisitely taken free-kick last season against Crystal Palace, a geometric joke of a goal, by unceremoniously upending Wilfried Zaha for a Palace penalty. He was handed two straight red cards by arch-nemesis Jon Moss in his first season, a surreal nightmare that flashes before fans' eyes in ultra HD before any 50/50 challenge. Xhaka is more ‘hold your breath’ than ‘breathtaking’; a malfunctioning cog in the Gunners' machine. His good work often goes under the radar, until he drops a bouncing bomb.

Arsenal always thrived on being unpredictable at their best, but not like this. Their flamboyant fluidity was impossible to stop at its pomp; Arsene Wenger favoured a midfield duo in the style of tectonic plates, shifting and covering ground together. Vieira, Fabregas, Ramsey, Cazorla: whoever played had to be adept at getting back to swarm attackers and mobile enough to join in onslaughts. Wenger even referred to Xhaka as “box-to-box” upon his arrival.

But Granit Xhaka is not cut from even the scraps of this cloth. Perhaps the least mobile midfielder ever signed under Wenger's reign, his strengths do not lie in winning possession, but using it. His best form has always come from dictating play: in Wenger's experiments with three at the back, to Emery's insistence on sitting him next to Lucas Torreira. Unsurprisingly, both systems covered for the Switzerland international defensively.

So why isn't he always given defensive protection?

His abilities are clear. Xhaka thrives on the bigger stages, has a curious habit of scoring against top-six sides, and has dominated cup finals and European knockout ties. Against deep blocks, he's a skeleton key from deep. He's a starting pistol for a counter-attack, can send long like a quarterback and rarely misplaces a ball. He's a gifted individual when facing an opponent's goal, but a bumbling mess in reverse.

He's not unique, either. Manchester City play a system in which the attack-minded Ilkay Gundogan can operate as the deepest midfielder, because Pep Guardiola ensures he's covered spatially. Maurizio Sarri created a piece de resistance around Jorginho at Napoli, a ballet of movement and interlocking triangles that accommodated for a deep-lying playmaker physically, while retaining his creative carving.

The best coaches maximise the abilities available to them while hiding flaws. How often do you see Fabinho, Rodri and even Harry Winks in position to make a killer mistake in their penalty area? Arsenal, on the other hand, frequently have no clear structure off the ball; they melt into a vague press, trying to close down passing lanes.

It's every man for himself among the Gunners' defensive set-up; an arrangement of slow backing dancers out of rhythm with one another, desperately flinging themselves about. It makes Torreira look a hero. It's not a scene painted for any midfielder with an aversion to tackling, not least a confidence-shot regista who disables the comments on his Instagram profile after a heavy day at the office.

It seemed certain that Arsenal would press Spurs last weekend with the wolf pack intensity they did last season, but then very little is predictable in a north London derby. A Xhaka mistake while soaking pressure is perhaps one of the few things we shouldn't be surprised to see.

Good players can make mistakes. Equally, bad players can thrive under savvy managers. Whichever Xhaka is, he needs a little protection. Without it, his occasional dips into madness could cloud his career forever.