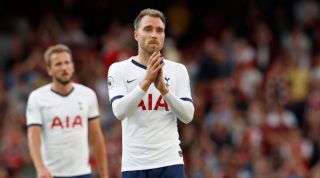 The Denmark international is in the final year of his deal with the Premier League club and free to agree terms with a new team midway through this season.

As things stand, Tottenham will lose their star midfielder on a free transfer at the end of the season when his contract expires.

The Mirror reports that the north London club are hoping they can still make some money from his sale during the winter transfer window.

Real Madrid have expressed interest in the playmaker in the past but were put off by Tottenham’s £100 million price tag last summer.

Eriksen has not hidden his desire to join the La Liga giants, saying over the summer that he was ready to “try something new” after six years with Spurs.

But the Merengues prioritised signing Eden Hazard from Chelsea, while making Paul Pogba of Manchester United their number one midfield target.

With Pogba holding talks over a new deal at Old Trafford, Real are considering other options and could be tempted to bolster their ranks with the Dane midway through the season.

Spurs have made several attempts to tie Eriksen down on a new contract but he is determined to move on and the club are now left with no option but to try to arrange a sale in January.

Eriksen has been heavily involved for Mauricio Pochettino’s side this season despite the uncertainty over his future, featuring in every Premier League fixture so far.

He has insisted that his contract situation won’t impact his performances, saying: “Everyone is professional and in all clubs there is talk of players going away.

“That side of the matter has no bearing on how we have performed so far this season.”

Spurs have begun their campaign poorly and currently sit in ninth place after picking up 11 points from their opening eight games.