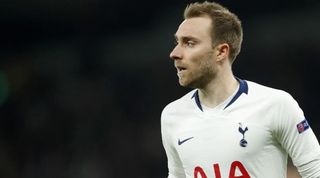 Christian Eriksen will remain at Tottenham until at least January unless the club receive an acceptable offer on Saturday.

The Denmark international is out of contract next summer and appears to have no intention of penning fresh terms in north London.

Eriksen rejected the possibility of joining Manchester United earlier this month, with the player preferring a move to Spain.

Yet although Real Madrid and Atletico Madrid have both been keeping tabs on the situation, neither has submitted an official offer ahead of Monday's European transfer deadline.

And Spurs boss Mauricio Pochettino says time is running out for the former Ajax playmaker to get his move.

"The good thing is if nothing happens on Saturday,” he said. “Because Sunday’s the game [against Arsenal] and it’s not going to happen on Monday – there’d be no real time to do something. On Saturday we are going to know if Christian is going to be with us or not.

“In this situation there are plenty of things that happen inside that I cannot translate to the media and our fans. The most important is to trust in our judgment. If people have the information to make this decision, it’s us.”