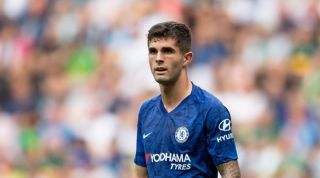 You'd be forgiven for forgetting that despite Chelsea's transfer ban, they have had a new addition to their squad this summer.

21-year-old Christian Pulisic signed from Borussia Dortmund for £58 million back in January, before being loaned back to the club for the rest of the season. However, he's found his chances hard to come by under Frank Lampard.

Speaking to The Guardian, he said: "Obviously I haven’t been getting as many minutes as I would like. I know my time’s going to come.

"I’m not just going to throw a fit and give up ever, so if I’m on the bench it doesn’t mean the gaffer doesn’t think I’m a part of the team. I’ve just got to keep pushing.”

When he signed, some hoped that Pulisic would fill the gap left by Eden Hazard, whose departure to Real Madrid was practically a foregone conclusion.

The American winger was a regular for Dortmund, gaining a big reputation for his quick running, skills and assists.

But a resurgent Willian, a returning Callum Hudson-Odoi, and manager's favourite Mason Mount have seen him struggle for minutes, only starting one game so far in the Premier League.

For his part, he has said that he's trying to ignore criticism of his performances:

"I don’t live under a rock. I hear things, I see things, but I do my best to block it out. The outside opinions don’t matter as much to me as to what’s in the team and myself and the people who care about me.”

Lampard meanwhile has been quick to quash any rumours of unrest, telling people they need to "calm down" over his treatment.

Pulisic did make a cameo appearance in the 4-1 win over Southampton at the weekend, laying on the final goal for Michy Batshuayi. He'll be hoping it was enough to catch the manager's attention.