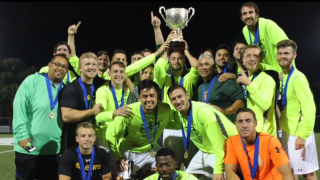 Walk into Christos Discount Liquor Store on the outskirts of Baltimore, MD and you will spot a row of trophies above shelves filled with brandy, cognac, scotch and bourbon whisky.

Behind the till there is even more silverware on show beneath banners dedicated to a successful local amateur football team.

This is the home of Christos FC.

Christos are a club started by a group of friends 20 years ago with the aid of sponsorship from their local alcohol outlet and they are on the brink of making a name for themselves on a national scale.

They barely train, but victory over Premier Development League outfit Chicago FC United on Wednesday will earn the side from the Maryland Major Soccer League (MMSL) - a regional division on the bottom rung of the United States Soccer Federation's ladder - a trip to face MLS giants DC United, the country's second most successful club, in the fourth round of the Lamar Hunt US Open Cup.

It is something that Jody Haislip, one of three brothers pivotal to the Sunday league team's founding in 1997 and now general manager, never expected when seeking sponsorship from their local liquor store for their debut campaign all those years ago.

"We're an amateur soccer team that was literally founded by some friends, just local guys that wanted to play soccer at a high level and 20 years later look where we are," Haislip told Omnisport.

"It's astonishing; it's something you could not have dreamt about 20 years ago."

Born from a passion and desire simply to play football, Christos has evolved into a club consisting of four different teams, with the main squad breaking new ground and winning two national titles in 2016 – the Amateur Open Cup and National Cup.

While trophies - and there have been plenty of them, including six MMSL titles – help encourage unpaid players to put the effort in, key to Christos' long-term development has been a relationship with a local university.

"We have that college locked down. If anyone graduates from that university and wants to continue playing Sunday-type ball they're going to come play for us."

Christos are able to draw on a large pool of around 40 players, but with no payment on offer full-time jobs are required and that inevitably makes it difficult for them to come together for group training.

Haislip, the playfully self-styled CEFIO – chief executive financial informational officer – due to his all-encompassing role, said: "If I had to guess, we might've trained one time in the last two or three years. With this core group of guys it's literally been one practice a year if that and that's not even a training session."

But Chris Wilson, the full-back who is the longest-serving member currently on the first team having joined in 2011, believes the tight-knit relationships between the players makes up for any lack of preparation.

It may well have been such spirit – a factor so important for Christos they have the word "Brothers" on their crest – that enabled them to shock professional side and 1995 US Open Cup champions Richmond Kickers in their second-round match on May 17.

"I think as far as teams go we have a pretty good chemistry and we always say it, we'd rather play away then play at home because we get to travel with our friends. It's much more enjoyable than playing at home and afterwards maybe hanging out."

For their next US Open Cup jaunt Christos will catch the last flight to Chicago out of Baltimore on Tuesday – a move designed to allow anyone who cannot get time off work to make the trip – and take on FC United the next day.

The players will travel back to Maryland on Thursday and that same day catch another plane to Cleveland to take part in the Hank Steinbrecher Cup, a competition that amounts to being an amateur Super Cup.

Inevitably there are hefty costs for such a schedule. While US Soccer offers reimbursement for expenses in the US Open Cup, clubs have to front the money themselves. In a bid to aid their burgeoning campaign, Christos set up a GoFundMe page that quickly hit its $7,500 target with the help of some national icons. New York Red Bulls midfielder Sacha Kljestan donated $500 dollars from his own pocket and retweeted a link to the fund-raising initiative, while former US international Taylor Twellman also provided greater publicity.

"Christos can't be mentioned with the Red Bulls and Taylor Twellman and guys like that. We were amazed, astonished and just truly grateful that people are stepping up and helping us out and truly believing in US soccer and this cup and what it means to these amateur teams," said Haislip.

"The Richmond win was certainly the biggest of our club and without the help of this funding it would've been difficult to get some of the guys out there [to Chicago]. But truly the Sacha Kljestan thing was a shock-and-awe like moment."

And while being named after a liquor store and barely training may appear unprofessional, the mentality within the Christos squad seems anything but.

"The great thing about our team is that we didn't go into that game thinking we were underdogs," said Wilson of their visit to Richmond, before discussing the prospect of taking on MLS giants DC United.

"To be able to say you're one win away from playing DC United is very cool, but I don't think anyone is looking towards that yet. I think everyone knows we have one game sitting in front of us playing that and I think everyone's ready to go up to Chicago and get a result.

"Come Wednesday if the result goes our way I think that there will be a lot of people really looking forward to proving themselves against an MLS team, but I really don't think that too many people are looking that far ahead which is the sign of a team that is ready to get there."

They may be amateurs, but Christos FC are a confident club proving they can mix it with teams above their level. Should they book a date with DC, the MLS giants will need to be careful to avoid becoming the latest chapter in this Baltimore side's remarkable story.