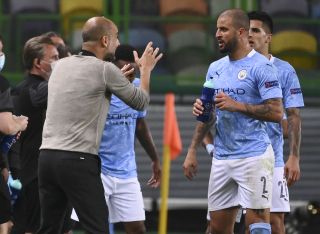 Manchester City are out of the Champions League after a 3-1 quarter-final defeat by Lyon in Lisbon.

Here, the PA news agency looks at where it went wrong for City in the competition yet again.

A lot of questions are being asked of manager Pep Guardiola. Did he get it wrong?

The City boss will certainly have to take his share of the blame. This was a fourth successive premature exit for one of the best managers of his generation after a last-16 defeat to Monaco in 2017 and quarter-final losses to Liverpool and Tottenham in the previous two seasons. After the Monaco and Spurs exits particularly, Guardiola was accused of “overthinking” matters with regard to tactics and selection. He faced similar criticism when he fell short with Bayern Munich too and it is hard not to point the finger in this direction again.

What did he get wrong?

Guardiola was rightly praised after masterminding City’s brilliant defeat of Real Madrid in the last 16, which they completed with a stunning victory at the Etihad Stadium last week, but he veered dramatically from that successful formula. There was just one change to the side – Eric Garcia for Phil Foden – but it made a huge difference. Guardiola opted to play Garcia in a three-man defence alongside Fernandinho and Aymeric Laporte with midfielders Ilkay Gundogan and Rodri sitting deep. It was an unfamiliar set-up that led to a disjointed, joyless performance with the potentially potent front trio of Kevin De Bruyne, Raheem Sterling and Gabriel Jesus too isolated.

Did Guardiola wait too long to change things?

People will wonder if the tactics could have been changed sooner or substitutions made earlier than the 56th minute. To be fair, City did respond positively after Maxwel Cornet’s opening goal in the 24th minute and there was still plenty of time to win the game after De Bruyne’s 69th-minute equaliser. However, with David Silva, Riyad Mahrez, Bernardo Silva and Foden on the bench, City did not play to their attacking strengths. They were a shadow of the side that have run up some big wins (4-0 v Liverpool and Norwich, 5-0 v Burnley, Newcastle, Brighton and Norwich) since lockdown.

What other factors contributed to the defeat?

After VAR controversy in their loss to Spurs last year, City will wonder when they are going to get the rub of the green with the system. This time there was a potential foul on Laporte by Moussa Dembele in the build-up to the former Celtic striker’s crucial first goal 11 minutes from time. The goal stood despite a lengthy VAR check. Guardiola can also not legislate for the horrendous miss by Sterling, who blazed over from five yards four minutes from time, nor the fumble from Ederson which led to Dembele’s second goal late on.

Of course they do. City will be frustrated because, after seeing off the Spanish champions last week, they were overwhelming favourites to beat the side that finished seventh in an albeit curtailed Ligue 1 this year. Frustration will also be compounded because with Juventus, Atletico Madrid, Barcelona and Liverpool already out, it seemed like the competition was wide open in its new streamlined format – even if Bayern Munich looked a formidable obstacle in the semi-finals. But Lyon proved they should not be underestimated. Rudi Garcia was an unpopular managerial appointment last autumn but he won the tactical battle. His side were defensively strong, well organised and dangerous on the break. Crucially they also took their chances while City did not.