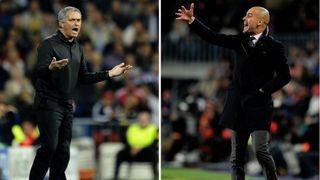 There's a storm brewing in China ahead of Monday's Manchester derby in Beijing, and not just between former Clasico rivals Pep Guardiola and Jose Mourinho.

Guardiola and Mourinho - preparing for their first seasons in charge of City and United respectively - are set to renew acquaintances in the International Champions Cup (ICC) tie, but adverse weather conditions could throw the fixture into doubt.

A bumper crowd of 91,000 fans are expected to pack into the iconic Bird's Nest Stadium for the glamour friendly.

However, a forecast thunderstorm could leave them disappointed.

"It is a concern," said ICC spokesman Xiaozheng Ben. "The weather has been really bad.

"But we're hopeful the game will go ahead."

United take on Borussia Dortmund in Shanghai on Friday.