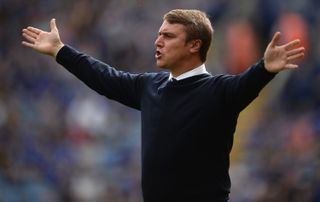 Clark was left bemused as their Championship rivals levelled things up at 2-2 in the last minute of their meeting at Huish Park to send the game into extra time.

The goal came through defender Byron Webster, who chipped into an empty net for the home side after Birmingham goalkeeper Colin Doyle's had kicked the ball out of play to allow team-mate Dan Burn to receive treatment for an injury.

Webster's decision to equalise instead of returning the ball following the resulting throw-in prompted ugly scenes between the two sets of players.

Yeovil manager Gary Johnson did attempt to calm the situation somewhat, instructing his side to allow Lee Novak to score unopposed in extra time directly after the hosts had taken a 3-2 lead through Luke Ayling.

Birmingham went onto to progress to the next round via a penalty shootout, but Clark is eager to see further action taken by the game's governing bodies.

"I might be wrong but my parents made me grow up to be a good sportsman, win, lose or draw," he said.

"I'm going to go down the right channels to complain; something has got to be done.

"It's always easy to give a goal back when you're leading. We were winning going into injury time."

Johnson was quick to apologise to Birmingham, although the 57-year-old stressed that he is growing tired of play stopping for injuries.

"I apologised to Lee Clark at half-time in extra time because, on reflection, it was ungentlemanly," Johnson explained.

"I wanted us to play on but I didn't expect the Birmingham side to stand still, and didn't expect Byron to hook a goal in. However, we get a bit fed up of teams kicking it out for their own players here when we're trying to get a goal back.

"It's happened to us for the last three games. I had this gremlin in my head that said play on, but I didn't expect the series of events to follow."

Tuesday's game is not the first time that Yeovil have found themselves at the centre of such controversy, following a similar incident in 2004.

Yeovil striker Lee Johnson - the son of Gary, who was also in charge at the time - scored a bizarre goal against Plymouth in a League Cup tie.

Lee Johnson attempted to play the ball back to Plymouth goalkeeper Luke McCormick after an injury stoppage but the Plymouth man had moved off his line.

Gary Johnson immediately allowed the opposition to score unopposed to level things up.