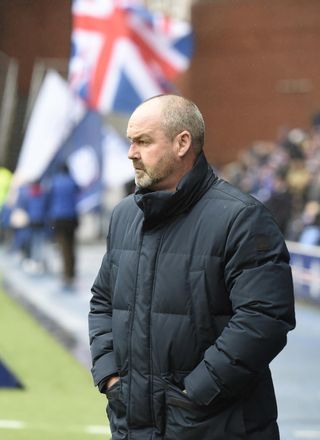 Steve Clarke insists his GMB Scotland Manager of the Year nomination is a compliment to his Kilmarnock players.

The Killie boss joins Dick Campbell of Arbroath, Alloa’s Jim Goodwin and Ross County’s joint managers Steven Ferguson and Stuart Kettlewell in the last four of the vote from the Managers and Coaches Association – a branch of GMB Scotland.

The winner will be announced at PFA Scotland’s annual awards dinner at the Hilton Hotel, Glasgow, on Sunday.

Ahead of the Ladbrokes Premiership clash with Hearts at Tynecastle on Saturday, Clarke said of his nomination: “Pleasing but a big compliment to all the players.

“It just means that the team has done very well for you.

“Obviously it is good to be nominated. I was nominated last year as well which means the season and a bit I have been here the team has done really well. The players have been great.

“As I always say, when the team is good everyone reaps the rewards.

“When the players are performing well week-in, week-out, it makes my job easier.

“I have always spoken highly of the group of players I found when I got here.

“I managed to supplement that with good loans and one or two extra bodies to help us out so it has worked out really well for us.”

Clarke, who reiterated that there has been no approach from the Scottish Football Association with regards the vacant national team boss position, is looking for the Rugby Park side to get back to winning ways.

With three fixtures remaining, Killie are in fourth place, three points behind Aberdeen but have lost their two post-split matches to the Dons and Celtic.

He said: “We need to remedy that this weekend.

“We have to beat Hearts. That’s all we are focused on, we have been focused on that since last Saturday.

“We need to get a win on the board and hopefully we do it this weekend.

“They have beaten us twice at Rugby Park this season so we probably owe them one.”