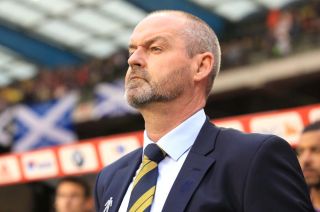 Scotland manager Steve Clarke admits they need a “big win” to unite the nation behind them.

Clarke believes the visit of World Cup quarter-finalists Russia to Hampden on Friday offers the next chance to do so but not necessarily the one they need to take.

Scotland face a pivotal three games in their chances of automatic qualification for the European Championship, with the visit of Belgium on Monday followed by a trip to Moscow on October 10.

Clarke took over in May with Scotland needing to pull a major result out of the bag following their shock opening defeat in Kazakhstan, and he feels it is about time the national team turned the tables.

Scotland have beaten the likes of Slovakia, Slovenia and the Republic of Ireland in recent campaigns and beat Croatia home and away in 2013, but the last time they took the scalp of one of the major football nations was in France in 2007.

When asked if Friday was a must-win game as Scotland look to close a three-point deficit on Russia, Clarke said: “Rather than put the pressure on to one game, over the course of the next three games we have to get enough points to make sure we are still in contention in the group.

“Whether it’s Friday or Monday or away to Russia, we need to get points, we are aware of that.

“We need a big win. As a country it’s been a long time since we turned over one of the so-called big boys.

“I think Russia, having been in the last eight of the World Cup, are one of the bigger teams.

“It’s about time that we, as a nation, rather than being on the receiving end, we are dishing out a result that’s deemed to be an upset. So hopefully on Friday night that can be the case.”

Clarke had called for Scotland fans to roar his team on when he named his squad and more than 35,000 had bought tickets ahead of the final 24 hours before kick-off.

But he knows they need to revive the interest of the wider public.

“Over a number of years we haven’t managed to reach a major finals,” said Clarke, who did not risk forward Steven Naismith in training on Thursday because of an ongoing hamstring issue.

“The more often that happens, the less people start to believe in it.

“So maybe one big result can change the mindset, not just of the squad but the whole nation. Hopefully it comes very, very soon.”

When asked if Russia at home was the best chance of doing that over the next three matches, Clarke said: “If you’re pessimistic. If you’re optimistic, you think you can win any game.

“If you have that mindset, then you find more often than not you can win games that maybe people don’t expect you to win.”

Both questions from the Russian media featured former Scotland and Lokomotiv Moscow striker Garry O’Connor, on his seemingly unfavourable views on Russian football and how he compares to Russia striker Artem Dzyuba.

Clarke said: “I’d like to think that after the game, maybe the Russian people will talk about something else in Scottish football rather than Garry O’Connor.”