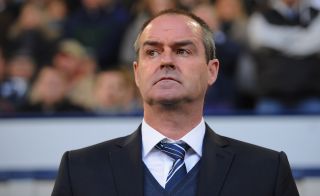 The Hawthorns outfit kicked off their campaign with a 1-0 defeat at home to Southampton last weekend, as Rickie Lambert's 90th-minute penalty handed the visitors victory.

But there would be no repeat of that late drama at Goodison Park, as West Brom held firm to take their first point of the new Premier League campaign - much to the delight of their manager.

"Everybody was good. I think our season started today, last week was disappointing," he said.

"We were determined to come here and address what we didn't do properly last week and I think you saw the effort on the pitch and the result for us is a good result."

The Scot also discussed the omission of striker Nicolas Anelka, after the Frenchman was given compassionate leave this week following the death of a close friend.

"The preparation has actually been okay. Nicolas had been injured anyway so he hadn't trained, the team I started with was the team that I'd worked with for three days last week before the game," he added.

"It didn't disrupt us too much in terms of actual preparation for the game. That was the team I had in mind on Wednesday and the team I shaped up on Thursday so I think you can see we were ready for the game.

"I think we'll wait until Nicolas indicates to us that he wants to sit down and have a chat. I think that's the best way for now. We've got another game midweek so I'll think about it a little bit tomorrow and then I have to think about playing Newport Town on Tuesday night."

Clarke went on to explain that he would be happy with his squad even should the club fail to make further additions before the end of the transfer window.

"I'm aware of everything that's closing in on us. Last weekend I was so disappointed with the way we played that I'm focusing all my attention on the players I've got just now.

"If other players come in fantastic and if they don't - and I've told the players this - the group we have is fine. It's a strong group for the Premier League, and you saw that today."