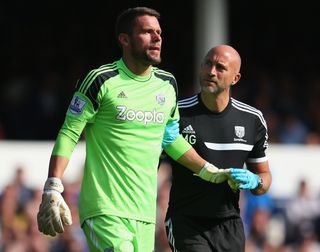 The 30-year-old produced an outstanding performance to keep the hosts at bay at Goodison Park, but was forced off on 78 minutes after feeling a sharp pain while unchallenged in his own box.

And Clarke has revealed his concern regarding the possibility of a lengthy lay-off for the England international.

"He felt a ‘pop’ in his ankle. The pain was obviously strong," he said.

"Ben's not the type to go down if he's got nothing wrong with him and the fact that he came off the pitch tells you it's an injury we have to be a little bit worried about.

"But at the moment, until we diagnose, have a look, do the scans and let the medical people do their job it's difficult to say exactly what's the prognosis.

"He was just moving around his six-yard box when he said he felt it pop. It's more the ankle but until we do the scans it's probably better to say it's an injury that worries me a little bit just now."

"Boaz is injured. He got injured in training, he hurt his wrist," he added. "He's improving but young Luke went in and did okay."