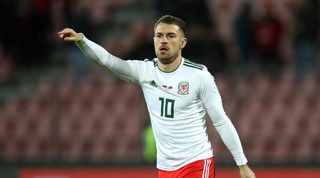 Juventus legend Claudio Marchisio was a key fixture of the Turin side for over 10 years, but now retired thinks his No.8 shirt is in very good hands.

Speaking to the Daily Mail, Marchisio was quick to sing the praises of Aaron Ramsey: "[My shirt is] in the best hands. Ramsey is a fantastic player.

"The No.8 is such a beautiful number that it had to end up on someone's back. My preferences were two: Ramsey or an academy player who moved up to the first team."

One of Marchisio's best spells in the Juventus team came when he was playing alongside Paul Pogba, and the Italian said his former colleague's talents were obvious from the start:

"One of the very first training sessions with us he was at a very young age," Marchisio recalled.

"Andrea Pirlo and I took only 15 minutes to understand how strong Pogba was, and we also knew that he would soon take someone's place in the team. Fortunately, the coach found a system that allowed us to all play together."

Marchisio began as a second striker in the youth team at Juventus, before being moved back into midfield, and was clear in who his big influences were when it came to perfecting that position:

"Without a doubt, my favourites remain Gerrard and Lampard. They were both very strong and both undisputed symbols of their own clubs.

"I admired both their charisma, the mastery of the game, the leadership, the courage and their attachment to the shirt."

Ramsey, meanwhile, has had to wait for his chance to shine at Juventus, having arrived from Arsenal carrying an injury, but hasn't looked out of place in his three appearances so far and scored on his debut against Verona.

Antonio Conte vs Maurizio Sarri - tale of the tape