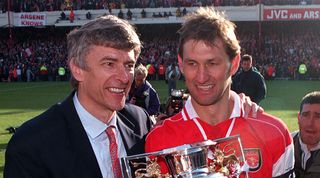 The importance of a captain is often debated, but generally people can agree that they should probably be playing most of the time. Even some of the time would be a start.

Unfortunately for Arsenal, that hasn't often been the case in recent years. Laurent Koscielny replaced the retired (and largely unused) Per Mertesacker by leaving under a cloud after a period of injury. Before Mikel Arteta, another non-player for his final two seasons, there was Thomas Vermaelen – who featured in only seven league starts across his last two seasons.

The current situation is so dire that head coach Unai Emery asked his squad to vote for a permanent captain after trialling five on rotation... and Granit Xhaka appears to have won out.

The Gunners have, however, had some strong leaders before thir near-decade-long debacle...

Henry was only Arsenal's official captain for one season in 2005/06, but he was a leader in prior years without the armband. As such, it feels wrong to leave the club’s record goalscorer off any 'greatest ever’ list involving the Gunners.

The striker captained his side to their first Champions League final in 2006, where he not only scored crucial goals such as that fine effort at the Bernabeu, but also helped to motivate a side which didn't concede a single goal between the first knockout round and semi-finals of that year’s competition.

His influence was so highly regarded by Arsene Wenger that the legendary Arsenal manager brought his player back to the club in 2011/12 on a short-term loan deal. Henry duly helped the Gunners to finish third and qualify for the Champions League – that season, the minimum finish required for Europe's elite competition. The Frenchman was also made an Arsenal youth team coach by Wenger after the striker finished his playing career, and Henry presided over the development of players including Alex Iwobi, Reiss Nelson and Eddie Nketiah.

Shortly after the Second World War, Mercer joined Arsenal from Everton. His presence on and off the pitch was so influential that he was made captain almost immediately.

The defender demonstrated such fantastic commitment to the club that he commuted from Liverpool to London to play for the north Londoners, and only really ever saw his team-mates on matchdays.

Mercer led his side to two First Division titles and an FA Cup triumph during the late 1940s and early 1950s, helping to transforming Arsenal from post-war also-rans into league champions.

The 1949/50 FWA Footballer of the Year finished his career at Arsenal in 1955, having made 275 appearances, and left the club in a much healthier state than when he first arrived.

Another defensive skipper, McLintock was an inspriational figure at Highbury in the late 1960s and early 1970s.

He was made club captain in 1968, having been named as Arsenal’s Player of the Year the season before. McLintock wore the armband when the Gunners won the European Fairs Cup in 1970, before leading them to the league and cup Double in 1971 – where they won the title at White Hart Lane.

The defender was named Football Writers' Player of the Year that season and even given an MBE for his performances.

He may have left nearly 15 years ago now, but Arsenal still haven’t managed to replace the glorious force that was Vieira.

Skilful, stylish but a physical nightmare to play against, the French midfielder embodied leadership throughout his career at Arsenal. The France 98 hero won six major honours in north London and captained the club during their Invincibles campaign of 2003/04.

Vieira also scored the winning penalty in the 2005 FA Cup Final win over Manchester United, which turned out to be his final game for the club ahead of a move to Juventus in 2005.

Tony Adams' demons: "The sweats, hallucinations, terrors... the voices... this is not normal"

There’s a reason why they call him Mr. Arsenal. After coming through the youth ranks in north London, Adams was made captain of the club at the age of just 21 and didn't relinquish the honour for 14 years until his retirement.

The central defender, who formed an iconic partnership with Steve Bould at the heart of Arsenal’s backline, captained the Gunners to two First Division titles, two Premier League trophies, three FA Cup triumphs, two League Cups and one European Cup Winners' Cup in 1994. He is the only player in the history of English football to captain a league-winning team in three separate decades.

Adams made 504 appearances for the Gunners and spent his entire career playing at Highbury. 'Legend' hardly seems to do him justice.