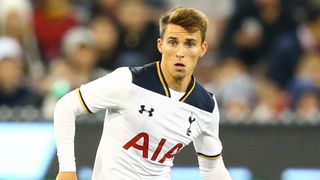 Swansea City are on the verge of signing Tom Carroll and Martin Olsson, boss Paul Clement has confirmed.

Norwich City full-back Olsson is set to arrive to provide cover for the injured Neil Taylor after a reported fee of £4million was agreed with the Championship side.

Carroll, meanwhile, is poised to complete a move from Tottenham in a deal said to be worth £4.5m.

Speaking after his side's 4-0 Premier League loss to Arsenal, Clement said that he expects both transfers to be completed soon.

"Martin Olsson and Tom Carroll are imminent and hopefully will go through without any problems," he said, as quoted by BBC Sport.

Strikes from Olivier Giroud and Alexis Sanchez, either side of own goals from Jack Cork and Kyle Naughton, gave Arsenal a commanding win on Saturday that leaves Swansea rooted to the foot of the table.

Clement, who was taking charge of his first match in the top flight after replacing Bob Bradley, admitted that his side paid the price for allowing their standards to drop after a promising opening but felt that a failure to award Ki Sung-yueng a penalty after a coming-together with Laurent Koscielny just before half-time proved to be pivotal.

"It is very disappointing. The first half we were in the game and looked solid defensively, even though we did not do enough offensively. We got caught on the counter for the first goal," he said.

"We had a big claim for a penalty. Looking back on it, it is a penalty.

"In the second half, we started poorly and then it was an uphill struggle after the first own goal. Arsenal showed how much quality they have offensively.

"We could have had a penalty and then two deflections went against us. I did see some good things but you have to do it for 90 minutes at this level.

"We have all got a difficult job on our hands and we have to work on the training field to get the basics right. We will have a better chance after that.

"We were wasteful with the ball, the team defended well in general, but we did not do enough offensively.

"It is not an eye opener, I know what this level is like. We need to put in some decent performances and be ready for the games we need to win."