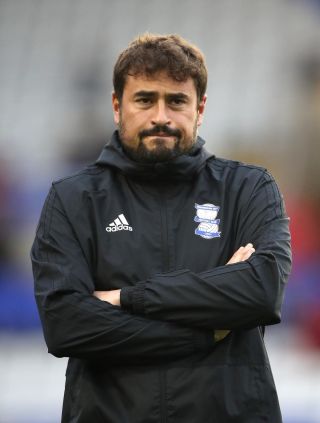 Pep Clotet refused to point the finger of blame at goalkeeper Lee Camp after his Birmingham side lost 1-0 at Wigan.

The Blues’ custodian was at fault for Wigan’s late clincher as he let Anthony Pilkington’s late shot slide agonisingly under his body.

It was a bitter blow for Clotet, whose side have now lost three matches on the spin, but he refused to criticise Camp.

“I understand that goalkeepers get criticism in these situations, but I don’t think Lee’s confidence will be affected.

“For me he’s started this season well, certainly at a better level than last season. I’ve been very happy with all his work so far this season.”

Clotet clearly felt his side deserved at least a share of the spoils, adding: “We dominated and dictated large parts of the game, but we just didn’t have that ability to really impose ourselves.

“All the players are still very focused, though. I can see that in their eyes.

“There’s no excuses from any of us, but sometimes football is football and you don’t always get what you deserve.”

Wigan enjoyed marginally the better of a goalless opening 45 minutes, with Josh Windass twice being denied by keeper Camp.

The breakthrough eventually came with 14 minutes to go.

Just seven minutes after coming on as a substitute, Pilkington fired home a rather hopeful strike that squirmed under Camp.

Wigan boss Paul Cook still wants more from his side, but he was happy to have secured maximum points.

Cook said: “It is what it is. This win gives us such a different atmosphere around the club.

“I didn’t ever think we looked like losing to be honest, but I suppose were a bit fortunate with the goal.

“These lads are really carrying the baton well. I think that’s one defeat in five for us now, and that’s okay for me.

“We just have to keep going. I think that’s the third clean sheet in a row at home, so hopefully we can go and do well at Sheffield Wednesday on Saturday now.

“We need points on the board. I don’t care who scores, but it really is a big step up to Championship level.

“The standard is so high. This was an important win for us, but we must keep challenging.

“This division is a huge challenge for a squad like ours, but I’m happy with how we’re meeting that at present.”