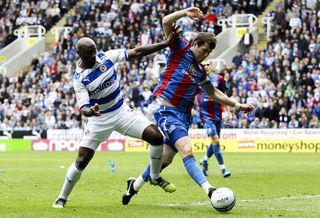 The defender has spent 18 months on the sidelines battling a groin problem, but manager Ian Holloway believes he could be back in as little as three weeks.

"Paddy is well on the way to getting back," he said. "I hope he will be ready in about three weeks.

"It was always going to be a gamble including him in our 25, as to whether he would be ready or not before January.

"We felt Paddy would have more influence in the dressing room than Florian Marange (left out of 25-man squad), and we thought he might be fit a little earlier.

"But whether or not he is fit, we need his type of people. His attitude has been sensational. He always believes we are going to get better and stronger.

"He has had a couple of breakdowns in training, and now I hope there won't be any more."

Meanwhile, long-serving goalkeeper Julien Speroni and midfielder Kagisho Dikgacoi are among a group of players who have been urged to remain patient in their wait for new contracts.

The duo could leave on a free at the end of the season if the issue is not resolved, but Holloway insists his main focus is on improving performances on the pitch.

"We know the situation, but we have to focus on getting points," he said.

Crystal Palace have suffered six defeats in seven fixtures since returning to the Premier League.