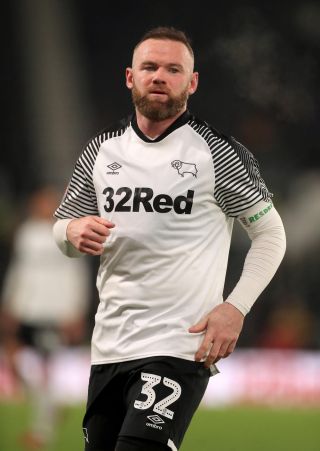 Manager Phillip Cocu hailed the impact of Wayne Rooney on and off the field after Derby snatched their first away win since the opening day of the season by beating Swansea 3-2.

Martyn Waghorn put the Rams on course for a rare road victory after eight minutes when he followed up Tom Lawrence’s powerful shot to tap in the opener.

But two goals in three second-half minutes turned the game on its head.

But Duane Holmes volleyed in an equaliser after 64 minutes before Lawrence snatched victory with a dipping shot from 20 yards with 10 minutes left.

Cocu feels it is no coincidence that Rooney’s arrival has coincided with their upturn in form.

He said: “Wayne provides quality, a class player, he has character and can also provide a link between the technical staff and the players.

“When we discuss options on the pitch before the game, I only have to wave and call his name and he gives something extra to us.

“He speaks a lot to the young players, he gives us organisation, and he works well with Martyn Waghorn. He shows how to press and push and on which side. He provides experience, but also quality.

“The team benefits from him. It’s more easy for him now because when he joined us he was a lot in our office and we gave him all the insights into how we work.

“I am happy to very open but he’s seen how we work and now his influence is getting bigger.

“When we were in the second-half, losing 2-1, it was amazing to see the boys come back into the game and win it, they showed great character and mental strength, the team did a fantastic job.”

Swansea missed the chance to cut the gap on their play-off rivals and manager Steve Cooper felt they only had themselves to blame.

He said: “We’ve got to be careful, if we don’t start winning games the gap will start getting bigger and bigger, it’s that time of the season.

“We have two games left this week and we’ve got to react on Tuesday. If we play better then we give ourselves a chance of winning.

“I’m not looking much further than that but I know we’re in that part of the season where you have to win games, and especially those home games.

“That’s what makes today doubly frustrating, we’ve shot ourselves in the foot, we allowed them to win the game rather than them having to work really really hard to earn it.

“It should have been the other way around, we should have put the game to bed after going 2-1 up, and we didn’t.

“It was a learning experience for all of us as a team. There was so much of the game we could have managed better and we didn’t.”