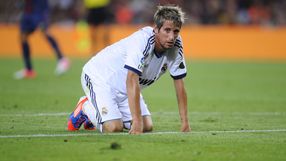 Local media reported that fullback Fabio Coentrao had returned late from the Christmas and New Year break and coach Jose Mourinho had demanded the stiffest possible punishment for his Portuguese compatriot.

A club spokesman declined to confirm the reports but they are the latest distraction for a team that needs to focus all its energy on getting back to winning ways and cutting the yawning 16-point gap to unbeaten leaders Barcelona.

Real are third after 17 matches, seven adrift of second-placed Atletico Madrid, and have already dropped more points than during the whole of their title-winning 2011/12 campaign.

Forward Cristiano Ronaldo, who is not scoring at anywhere near the same rate as last term and has been linked in the media with a move away from Spain, called for unity on Wednesday and insisted that Real can still catch Barca, who host city rivals Espanyol on Sunday.

"The important thing is to win and be together, both the team and the fans," Ronaldo told a news conference.

"The league is tough, but it is still mathematically possible for us to win and we have to keep the belief until the end," the Portuguese international added. "It will be an uphill struggle."

Barca, meanwhile, have made a record start to the season and the only points they have dropped were in a 2-2 draw at home to Real in October.

The players, led by the prolific Lionel Messi, are united behind coach Tito Vilanova, who returned to work earlier than expected on Wednesday after undergoing a throat operation two weeks ago.

Cesc Fabregas, Adriano and Alex Song, who picked up minor injuries at the end of last year, were declared fit by medical staff and completed a full training session on Thursday.

Promising winger Isaac Cuenca, brought into the first team under Vilanova's predecessor Pep Guardiola, also trained with his team-mates as he continues his recuperation from a serious knee injury sustained at the end of last season.

Atletico, resurgent under Argentine coach Diego Simeone, kick off the New Year with a trip to Real Mallorca on Sunday, when striker Radamel Falcao, playmaker Arda Turan and centre back Miranda are all suspended.

"The absences of Falcao, Arda and Miranda will give other players a chance, which is good for the team," Simeone told a news conference on Wednesday.

He dismissed reports that Turan could leave in the January transfer window.

"Arda is definitely not leaving," he said. "He has a contract with the club and he is an extremely important player and he will prove that where he has to prove it."

On Saturday, fourth-placed Malaga, who closed to within two points of Real when they beat them 3-2 in their final match of 2012, play at Deportivo La Coruna and Valencia, struggling down in ninth, travel to Granada.