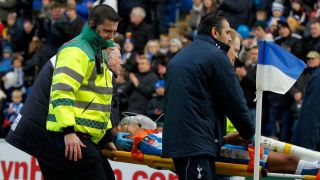 Colchester United defender Alex Wynter was taken to hospital after a sickening clash of heads with a team-mate in Saturday's FA Cup defeat to Tottenham.

Wynter collided with Tom Eastman in just the second minute of the fourth-round match and required lengthy treatment on the pitch before being carried off on a stretcher while being given oxygen.

A club statement released just after half-time read: "An update on Alex Wynter from the medics - he's sitting up and talking in hospital, where he's in for observations at the moment.

"He had treatment to a deep cut in his mouth and, whilst a little disorientated, is otherwise doing OK."

Eastman left the field for stitches and bandaging after suffering a bad cut to his head and had to be subtituted later in the half despite initially returning to action.

Two goals from Nacer Chadli inspired Spurs to a 4-1 win to book their place in the fifth round.