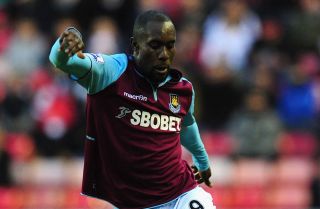 The striker was released by the Upton Park outfit after seven seasons in May, but re-signed on a three-month deal on Monday as manager Sam Allardyce looks to boost his forward options in the continuing absence of record signing Andy Carroll.

And Cole is determined to make an immediate impression on Allardyce if he is given the opportunity against Manuel Pellegrini’s men this weekend.

"I'll train all week with the team and then it’s just up to the manager to see what he wants to do. Hopefully I will make the bench and take it from there."

Cole's contract expires in January, but the former Chelsea man has spoken of his desire to prove himself worthy of a longer deal.

"If I'm doing the business and doing well and making a difference in the team, we are in good shape and the manager and the chairmen want to keep me on, I'll always be available and hopefully we can crack on after that," he added.