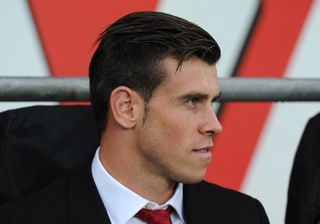 Tottenham winger Bale, who has been heavily linked with a big-money move to Real Madrid, was sidelined for the 0-0 draw against the Republic of Ireland at a sparsely populated Cardiff City Stadium on Wednesday.

Coleman had goalkeeper Boaz Myhill and Ireland's poor finishing to thank for avoiding defeat as the visitors failed to capitalise on their handful of presentable opportunities to win the game.

And the former Fulham boss was quick to look elsewhere for reasons behind the out-of-sorts display.

"We've had a lot of media at the hotel, a lot of international media as well, for obvious reasons, and maybe that's knocked us off our stride," Coleman said.

"Ireland were very well organised and physical and Boaz pulled off some terrific saves.

"We rode our luck once or twice but I'm delighted with the efforts the boys have put in.

"We looked tired towards the end because some of the guys haven't even played 90 minutes."

"We were working hard to keep it tight defensively," he said.

"Myhill is a good keeper - he made some great stops. Ireland had the better chances but we put our bodies on the line."