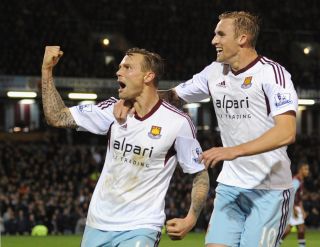 The 25-year-old helped West Ham to a 2-0 victory over Burnley in the League Cup on Tuesday, scoring from the penalty spot in the fourth minute of injury time after coming on as a half-time substitute.

Collison had only recently returned to Upton Park following a one-month stint at Eddie Howe's side, where he made four appearances.

And the Wales international has thanked Bournemouth for giving him renewed confidence and is now focusing on breaking into West Ham's starting XI.

"The loan move was a great experience and it was invaluable getting game time," he told the club's official website.

"I played four 90 minute (matches) back-to-back in a month, which I haven't done in a long time. I'm back now and I feel fitter and sharper.

"You could say I've got a new lease of life and I feel ready to go again and to fight for my place.

"Nights like Tuesday will obviously go in my favour and hopefully I've given the gaffer a few headaches and see where we are in a few weeks."