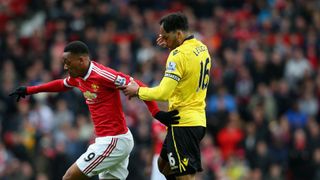 A meek 1-0 defeat to Manchester United confirmed the inevitable for Villa on Saturday and the Premier League ever-presents will play second-tier football for the first time since 1988 next season.

Lescott said after the Old Trafford defeat that confirmation of Villa's demise was "a weight off the shoulders", angering fans and pundits such as Collymore alike.

After Collymore challenged Lescott and Gabriel Agbonlahor - unavailable for the United match due to a lack of fitness - to answer their critics publically, the pundit posted an image on Twitter of a private conversation he had had with the former England defender, who had offered to "sort this out as men".

Collymore quickly deleted the post, following it up with "Sorry, didn't mean to send that. Phone was in my pocket." - referencing Lescott's excuse for sharing an image of a luxury car after coming in for criticism in the wake of a 6-0 thrashing at home to Liverpool.

The ex-striker had earlier said on talkSPORT: "I would love Joleon or any other Villa player to call me up in all seriousness.

"I'd like any Villa player, particularly Joleon Lescott to come on and explain first about the non-tweeting car - I've tried it and it's virtually impossible.

"This is a senior international footballer in the modern era - 'Now confirmed, maybe it's a weight off the shoulders'.

"Why is it a weight off the shoulders, Joleon? It should hang on your shoulders in Dubai in Marbs with a gold bottle with the ace of spades on it when you and Gabby and Leandro [Bacuna] are all going to be laughing when your agents go off and tout you to other football clubs.

"That's when the weight of the world should be on your shoulders."

"But when it mattered today with your hometown club that you profess to support you couldn't be as c**p as me and keep them in the top of the table or play in Europe. You've helped them go down."