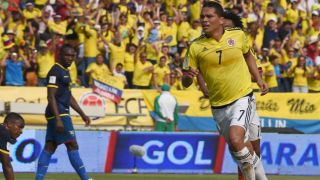 Colombia striker Carlos Bacca is growing in confidence with the national team ahead of their pre-Copa America Centenario friendly against Haiti.

The AC Milan man has 11 international goals to his name and will be eager to add to that, starting with the clash at Marlins Park in Miami on Sunday.

Colombia have been drawn with the United States, Costa Rica and Paraguay for the special-edition Copa.

Bacca was full of praise for coach Jose Pekerman and said he was becoming more comfortable with the national team.

"From the first day I have the confidence of coach Pekerman," he said.

"Every day I feel better with the team."

The Haiti clash is Colombia's last friendly before the Copa opener against hosts USA in Santa Clara on June 3.

Bacca said he was aware of the difficulties awaiting his team in Group A.

"These are difficult teams. The United States is at home. We debut against them and we must play an intelligent game," he said.

"Paraguay and Costa Rica are big teams that play at a high level. In the case of Paraguayans they have a great coach who leads a new generation that wants to have a good Copa America and return to a World Cup."

"They are young but experienced, who are doing very well in their respective teams," the Arsenal shot-stopper said.

Colombia have won their only two previous matches this year, beating Bolivia 3-2 and Ecuador 3-1 in World Cup qualifying.

More responsibility will fall on Bacca, given Radamel Falcao and Jackson Martinez have been left out of the squad.

Haiti, also preparing for the Copa, have won just one of their past five games and are unlikely to trouble Colombia.