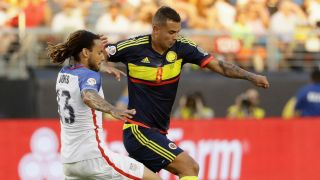 Dayro Moreno and Edwin Cardona are vying to replace injured captain James Rodriguez in Colombia's match against Paraguay at the Copa America Centenario.

James scored his country's second goal before he was forced off by a dislocated shoulder in Colombia's opening game of the tournament, a 2-0 win over hosts United States in Santa Clara.

The Real Madrid playmaker is expected to miss the Group A game against Paraguay at the Rose Bowl in Pasadena on Tuesday, before returning for the clash with Costa Rica four days later.

In his absence, head coach Jose Pekerman could opt to move Monterrey's Cardona, who set up Cristian Zapata's opener against the US, into a central role.

"The responsibility to replace James is for everyone," said attacking midfielder Cardona.

"If I get chosen to play in that position I will do so for the benefit of my team. Of course, we have different characteristics, with James we have more ball possession."

Meanwhile, assistant boss Nestor Lorenzo talked up the credentials of Tijuana's Moreno, a late substitute in the win over Jurgen Klinsmann's team.

"Beyond the speculation on whether James will play or not – we will see how he progresses – I would rather talk about the characteristics of Dayro," he said.

"Dayro Moreno has penetration and good pace that allows us to use him in that position [playmaker] with good results. We think he is a versatile player - he can also help us playing further back."

Paraguay head coach Ramon Diaz will be hoping his team come away with a better outcome than in their opening game, a 0-0 draw with Costa Rica.

Despite being fortunate not to concede a penalty, Diaz insisted his side deserved to win in Florida.

"If I analyse the game, the team that should've had the three points was us," he said. "We lost two points - that's how I feel."

Another tight contest is expected in California, with Colombia's Sebastian Perez urging his side to take their chances.

"When we have the ball, we have to play dynamically and create space because Paraguay are a team that gives away little space. When we create opportunities we have to take them because there are not many in Copa America games," he said.

Colombia, Copa America winners in 2001, reached the quarter-finals last year and in 2011, while Paraguay were semi-finalists at the previous tournament, losing to Argentina in the last four.