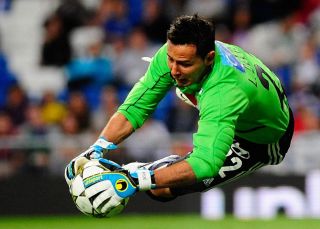 Santa Fe lost their third straight match to drop to third in the Colombia Primera A, while Atletico Nacional won El Clasico Paisa to move top.

But in the 80th minute Delgado, who also converted a free-kick in Millonarios' 1-1 draw versus Once Caldas a fortnight ago, scored from 25 yards, curling his effort over the wall and beating fellow goalkeeper Robinson Zapata to send the home fans into raptures.

The win took Millonarios to sixth with 15 points, while Santa Fe (16 points) were overhauled by Nacional and Once Caldas.

Nacional moved to 18 points and a plus 11 goal difference with a 2-0 derby victory over Medellin on Saturday thanks to two stunning goals in the space of six minutes.

Daniel Bocanegra gave Nacional the lead at Medellin's Estadio Atanasio Girardot in the 32nd minute, curling a left-foot shot over the goalkeeper and into the far top corner.

It was 2-0 in the 38th minute when Alejandro Bernal matched Bocanegra's effort, thrashing the ball home from the edge of the area to secure victory in the El Clasico Paisa.

Once Caldas (18 points, plus eight goal difference) sit second in the table after a 2-0 win away to Alianza Petrolera on Sunday, while Deportivo Cali drew 2-2 with Deportivo Pasto, Envigado lost 1-0 to Itagui and Deportes Tolima and Atletico Huila played out a 1-1 draw.