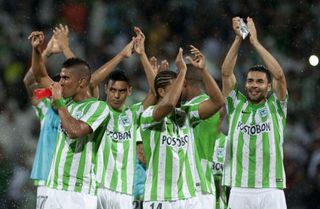 Juan Carlos Osorio's Atletico Nacional trounced Envigado 4-1 in the opening leg of their Apertura quarter-final tie on Saturday, while Santa Fe also eased past Once Caldas by the same scoreline.

Atletico Nacional went into the clash full of confidence after edging Brazilian giants Atletico Mineiro 1-0 in the first leg of the Copa Libertadores quarter-finals midweek.

And the visiting side made the perfect start at the Estadio Polideportivo when veteran defender Elkin Calle found the back of the net on six minutes.

Envigado got back into the contest four minutes into the second half courtesy of captain Neider Morantes' penalty.

That only seemed to spur Atletico Nacional into action with Luis Paez and Edwin Cardona scoring in the space of 20 minutes to put the Colombian powerhouse in the box seat ahead of next week's return leg.

Santa Fe enjoyed identical success against Once Caldas at the Estadio Palogrande thanks to Wilder Medina's brace.

Medina restored the visitors' two-goal buffer two minutes from the interval and it got worse for Once Caldas after half time when goalkeeper Jose Cuadrado saw red on the hour mark.

Santa Fe made the most of their numerical advantage with Medina scoring his second from the penalty spot in the 67th minute to cap a dominant performance.

In results on Sunday, Mayer Candelo's 65th-minute goal lifted Millonarios to a priceless 1-0 away win over La Equidad at the Estadio Metropolitano de Techo.

And 10-man Itagui played out a 1-1 draw with Junior after Edison Toloza equalised nine minutes from time for the away team.