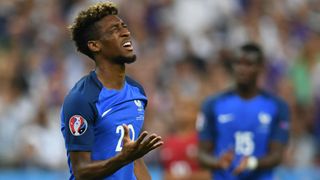 Kingsley Coman has withdrawn from the France squad due to an ankle injury, the French Football Federation (FFF) has confirmed.

The 20-year-old picked up a knock during training and, following an assessment from medical staff, he has returned to Bayern Munich for treatment.

The FFF confirmed that Monaco midfielder Thomas Lemar has been called up to the senior squad for the first time as Coman's replacement.

The news is a blow for head coach Didier Deschamps, who lost defender Samuel Umtiti on Wednesday after the Barcelona man suffered a hamstring injury in a practice match.

Eliaquim Mangala, on loan at Valencia from Manchester City, was drafted in to replace him.

Patrice Evra was also recalled after Layvin Kurzawa picked up a groin injury.

France face Sweden in a World Cup qualifier in Saint-Denis on Friday before a friendly match against Ivory Coast four days later.