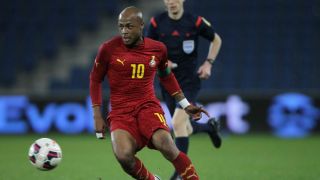 Comoros denied Ghana a first-leg advantage in their World Cup qualifier on Friday as they played out a 0-0 draw at the Stade International Said Mohamed Cheikh de Mitsamiouli.

The hosts booked their place in the second round of qualifying with an 8-1 aggregate success over Lesotho and had chances to pick up a surprise win over Avram Grant's Black Stars.

With talismanic striker Asamoah Gyan only able to make a late cameo on the artificial surface in Mitsamiouli following a spell out injured, Ghana survived some tricky moments including early on when Sulley Mohammed struck the post.

Comoros also had an effort ruled out for offside, while the visitors' best efforts came late in the game as Emmanuel Agyemang-Badu and Andre Ayew rattled the woodwork.

Ghana initially coped well with the synthetic pitch, but it was Comoros who went closest to breaking the deadlock when Mohammed struck Razak Brimah's post five minutes in.

Grant's men recovered from their early scare, but failed to trouble Salim Ben Boina's goal – Abdul Majeed Waris turning a delivery over the crossbar before seeing penalty appeals waved away for an apparent foul inside the area shortly before half-time.

With Comoros happy to sit back and counter, Ghana pushed on as Solomon Asante and Jordan Ayew sought to inspire a breakthrough.As

Grant's side brought that momentum into the second half with Waris and Jordan Ayew again proving the main dangermen for Comoros to deal with.

David Accam and Agyemang-Badu replaced Wakaso Mubarak and Asante as Grant sought to claim a late victory in a tense finale, while Gyan was introduced for the final seven minutes.

After Comoros saw their effort adjudged offside, Agyemang-Badu and Andre Ayew both hit the frame of the goal as the sides remained level heading into Tuesday's second leg in Kumasi.