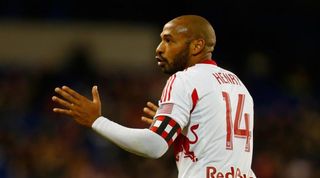 The Impact have beaten FAS twice already in the group stages, and the Red Bulls would like to do likewise in their bid to finish top and reach the quarter-finals.

On Saturday, the Red Bulls claimed a 4-2 win over the Impact in MLS after braces from Thierry Henry and Bradley Wright-Phillips.

Henry said his team needed to perform in every game for the rest of the campaign as they eye a play-off place.

"We started well the first 20 minutes. It was typical first half, we weren't good enough," Henry said.

"They scored, then it became difficult because they have quality.

"It was a must-win game, like every game will be until the end of the season."

FAS pushed Montreal in both matches but went down 1-0 in Canada and 3-2 at home.

Liga MX leaders America have been in fine form and would fancy their chances of topping the group.

Comunicaciones and America have both outclassed Bayamon FC, the group's bottom side.

Elsewhere, Group One leaders Pachuca of Mexico go to Guatemala to take on second-placed Municipal.

Olimpia are aiming for another win over Alpha United in Group Five, while Alajuelense host Chorrillo in Group Six.

Jamaican outfit Waterhouse will move top of Group Four if they can claim something at home to Panama's Tauro.